In routine navigation we teach the importance of tidal and ocean current flow on our progress. There are the obvious cases of narrow passes with strong currents that simply cannot be transited against strong flow. You do not even need to go to places like Seymour Narrows with currents of 14 kt. There are many passes in the Pacific NW with peak currents of 5 or 6 kts.

Often we get distracted on figuring the time of slack water to get through these passes safely and overlook the much bigger challenge of getting to the pass at the time we want to. It does not help us if we know when the pass is slack,  if we cannot predict our arrival time because we have 30 or 40 miles to go through weaker 0.5 to 1.5 kt currents that are changing with time. In short, the real nav challlenge is the navigation on the way to the strong current, not the pass itself.

Obviously, the lower the power of your boat the more important this is. So this is more an issue for sailing vessels that go only 5 kts or so, or any kayak or row boat. But to some extent it affects even larger vessels if the strong current pass is a long way off. Even cruise ships take Seymour Narrows seriously.

As the OAR NW team gets closer to pushing off from Dakar on the way to Miami, 3,600 nmi across the tropical Atlantic, we face the fact that this same issue of currents becomes a dominant factor in efficient navigation, even in the middle of the ocean.  This is not like the Gulf Stream, as complex as that is–we did that back in 2006 when they rowed across the North Atlantic–this is mid-ocean without any well defined rivers of current like the Gulf Stream, which is well forecasted and the data easy to come by.

First, it is not even well known that current could be a factor where the boat will be now. If you look on a Pilot Chart, you will see that the predicted (climatic) general flow of the current is right behind them all the way across, at about 12 miles a day drift on average. But like most environmental data, the average is rarely what you get. It is even worse with currents than with wind.

The surface of the ocean, well away from large global patterns like the Gulf Stream or equatorial currents, is still subject to transient patches and eddies of strong current. In fact, the surface of the ocean, underneath the undulations of the swells and waves, is a turbulent surface, like the top of a big washing machine.  Each of these hills and valleys of water give rise to geostrophic current flow as gravity pulls the piles back down.  We can get very good data on the ocean surface heights from radar altimetry from satellites, and this data is then used in mathematical models to predict the currents, which are then either enhanced on diminished by the prevailing winds, temperature gradients in the water and other factors.

In short, with the help of many satellites (not just one) and with sophisticated computer modeling the flow of surface currents can be predicted in great detail. An example is shown below.  These data are from the RTOFS-Atlantic model, operated by the US National Center for Environmental Prediction.  A summary of all models is given at this GODAE site. We use the program Panoply (written by Robert B. Schmunk of NASA) to view these data.

Here we see an ongoing eddy just south of the rhumbline route of OARNW, marked with a red ellipse. The picture below it is zoomed in, and the one below it zoomed in more. 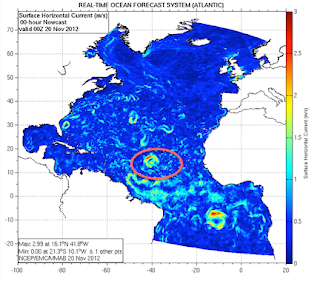 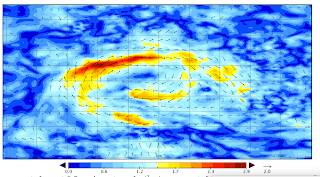 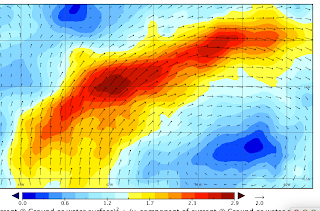 The speed scale in m/s. To get kts multiply by 2 (actually 1.94).  Thus we see in the middle of the ocean, a patch some 30-40 nmi across and some 300 long that varies from NE to E,  all of which is flowing against the boat (which is headed west) at current speeds higher than can be rowed and peaking at some 5 or more kts. This is faster than most of the Gulf Stream!

If the boat wandered into this, or it wandered under the boat, they would be stuck. Their GPS would tell them they were going backwards, but they would not know why nor what to do about it.  These systems could last weeks.  Thus we  have a wonderful opportunity to study these patterns.

So you see the fun we have ahead of us, which is two fold. First use the predictions as best we can to direct the boat to the favorable side of such eddies, and second to use all of the wonderful data we are gathering and transmitting back to UW hourly to measure these currents to see how accurate the predictions are. This data will be available to the public as well.

There are numerous models, so we will try to learn as much as we can about this and report our progress here as we proceed. We will return with another note on how we unfold the current speed and direction from what we measure on board. It will take input from compass heading, knotmeter speed, COG and SOG from GPS, plus true wind speed and direction to account for wind drift, and some (fudge) factor to account for the affect of the waves on boat speed. (We monitor the pitch and roll of the boat at all times, and when it surfs down a wave, the bow will go down at a steeper trim than when just crossing a wave without surfing, and the acceleration shows up in the speed records.)

We can also now follow drifting buoys to get more info on the currents as well. See note on our OARNW Ocean Currents page.

We can now overlay these data onto Google Earth, along with the location of the boat, winds and waves, to get a full dynamic, near live view of the conditions. The data below are from Nov 18, 2012 1400z. It shows strong eddies north and south of the Cape Verdes. Color code for speed is the same as above, ie red is about 5 kts! These test data are compliments of mercator-ocean.fr (thank you), again processed and displayed using Panoply. 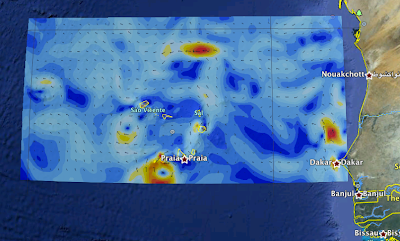 For further information on mesoscale ocean currents see the text and many great links in this article from Aviso.  It is an excellent overview with many specific examples.

One of the things you will learn from surfing around the Aviso site is that these anomalous current eddies are not common (could we guess that from the name?) and not uniformly distributed around the world's oceans. There are places they occur more often that others. A couple interesting ones are the Gulf of Tehuantepec and the Cape of Good Hope, neither of which is related to our trip. The Aviso links have the discussion and maps.

To see how these statistics might affect our trip, we first note the terminology: cyclonic eddies are those spinning like Lows, that is counterclockwise in the NH; and anticyclonic eddies spin clockwise, like Highs. The example we show above is an anticyclonic current eddy. Here are pictures that compile location statistics over many years for each type. These pictures are extracted from larger pictures at Aviso.

To show up in these data below, the eddies had to persist for at least 18 weeks, which is quite a long time.  Both types drift slowly to the west at 4 to 5 nmi per day. We may well end up chasing some, just has we had to chase Gulf Stream meanders in 2006, which typically move rather faster than these eddies.  A few days of extra hard work could give the boat a nice ride for a week if we find a good one.


These just give us some idea of the probabilities. The one we showed above, for example, is in a region that does not show any activity at all.  We can only conclude that we are more likely to encounter these on the second half of the voyage more than on the first half.  However, a row boat is strongly affected by any of them, so we will be watching at all times.

We still have no direct information that these forecasts are valid and practical on the level we care about. This will be one of the interesting outcomes of the voyage.

We have more information on ocean currents at www.starpath.com/currents. Get an email notice on updates Documents the 2006 voyage that Starpath was proud to support — both in training and then day by day, across the Atlantic and into the Guinness Book of World Records